Home » About Us » About The New Vicar 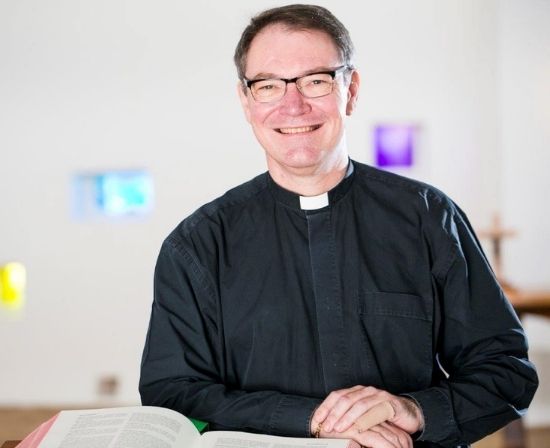 The Wardens and parish of St George’s, Malvern are pleased to announce that the Archbishop of Melbourne has appointed the Reverend Dr Gregory Seach as the next Vicar of the parish.

Fr Gregory comes to Malvern from the Diocese of Perth, where he has been the Warden of Wollaston Theological College since 2015.  While there, he undertook lecturing at Murdoch and Charles Sturt Universities, and in the Schools of Philosophy and Theology, and Humanities at the University of Notre Dame, Australia (Fremantle).  One of his greatest joys was the establishment of the ‘Wollaston Certificate in Theology’ and the ‘Wollaston Certificate in Anglican Leadership’.  The first of these was an opportunity for interested lay people to engage in serious scholarly study of the Christian faith, without necessarily committing to the demands (or cost!) of a University degree.  The other was specifically designed to promote an understanding of Anglican Christianity to those employed in Anglican schools across southern W.A. and in the Diocese of Wangaratta.  He remains a member of the Doctrine Commission of the Anglican Church of Australia and was a Perth representative at General Synod.

A cradle Anglican who was born and raised in Sydney, his first degree was a Bachelor of Arts (with first class honours, in English Literature) at the University of Sydney.  He taught English, history and drama in an Anglican boys’ school in Sydney for ten years, while singing in the choirs of St James’, King Street and Christ Church St Laurence.  He moved to Melbourne in 1998 and was prepared for ordination at Trinity College.  He received a Bachelor of Divinity (again with first class honours) from the Melbourne College of Divinity.  On February 3, 2002, he was ordained deacon at St Paul’s Cathedral, Melbourne (hence the appropriateness of his Induction at St George’s occurring on February 3), and served a curacy at St John’s Camberwell.  Archbishop Peter Carnley awarded him the Sambell Scholarship from the Diocese of Perth in 2005, and he also received the Turner Studentship from Trinity College and the Wordsworth Studentship from the Faculty of Divinity in Cambridge.  This allowed him to travel to Cambridge and complete a PhD in Theology and Literature.  While at Cambridge, he was also awarded the Decani Scholarship from Clare College, which began his association with that second oldest College (founded in 1326) in the University.  He was then appointed Dean and Fellow of Clare – a College which has one of the most famous and excellent mixed-voice choirs in that remarkable city!  (Occasionally he also led Evensong at the ‘younger, next door’ King’s College!).  While Dean of Clare, he was also an Affiliated Lecturer in the Faculty of Divinity in the University.  He was co-convenor of the University’s ‘Vocations Group’ and, consequently, the Bishop of Ely appointed him as an Assistant Director of Ordinands for that Diocese.

Fr Gregory has greatly enjoyed his time in theological education and the formation of the next generation of ordained leaders in England and Australia.  Nevertheless, he also enjoyed deeply, both in Cambridge and Perth, times that involved the pastoral care of students, staff and others, and the general preaching and leading of services of worship.  Indeed, while Warden of Wollaston, he delighted in heading to the rural parish of York every month to lead that community in its worship of Almighty God.  Equally, he greatly enjoyed the education of lay people in parishes and Diocesan ‘training events’, as well as in the Certificate courses.  Thus, when the possibility of returning to parish ministry appeared, and in a place as committed to the support of the newly ordained as St George’s, together with the parish’s deep interest in growth, development and discussion of the Christian faith, and its remarkable pastoral care for patients at Cabrini hospital, Fr Gregory felt a strong sense of call and engagement.  Conversations with members of the Incumbency Committee firmly reinforced his sense that St George’s was the place to which God was calling him for the next stage of his ministry, and he is greatly excited to work alongside the people of God at St George’s as, together, all minister to the people of Malvern, the City of Stonnington and others God may send to this sacred place which has maintained its historic witness to Jesus Christ and the Christian faith, in the remarkable Anglican way.